COMEDIES, HISTORIES, & TRAGEDIES. PUBLISHED ACCORDING TO THE TRUE ORIGINALL COPIES. LONDON: ISAAC JAGGARD, AND ED. BLOUNT (PRINTED AT THE CHARGES OF W. JAGGARD, ED. BLOUNT, I. SMITHWEEKE AND W. ASPLEY), 1623
The first collected edition of Shakespeare's plays, 'the First Folio': the most important book in English Literature and, with the King James Bible published just a few years earlier, one of the two greatest books of the English language.
Very rare in this state: a fine copy, in a handsome late seventeenth- or early eighteenth-century English calf binding, of the sole source for eighteen of Shakespeare's plays.
This copy lacks four preliminary leaves, but, as Anthony West has recorded, "one of the noteworthy features of this copy is the cleanness and crispness of the text leaves, all of which are present. The text is virtually unmarred, with the loss of letters, rather than words, on about ten leaves..." (The Shakespeare First Folio. The History of the Book. Volume II. A New Worldwide Census of First Folios, p.131).
Containing thirty-six plays the First Folio is the cardinal point of all Shakespeare's dramatic output, around which all Shakespearean scholarship has revolved since publication in the early seventeenth century.
Folio (312 x 207mm.), 3 parts in 1 volume, 450 leaves of 454 (title and three other preliminary leaves supplied in facsimile), the normal issue complete with Troilus and Cressida and Prologue (Blayney, The First Folio, p.24), press-variants on C4r, vv2v and vv3r all in state 2 (Blayney, introduction to The Norton Facsimile, p.5), printed on French hand-made laid paper, text in double columns within rules, 66 lines, headlines and catchwords, Roman and italic letter (20 lines, 82mm.), woodcut head- and tail-pieces and initials, early annotation on verso of q4
Binding: late seventeenth-century or early eighteenth-century (c.1690-1730) English panelled calf with alternating light and dark panels, covers with fillets and tooled borders in blind, floral corner tools, spine in six compartments with red morocco label, red speckled edges, single endpapers at the beginning and end, preserved in folding chemise and full brown morocco pull-off box
Provenance: William H. Robinson Ltd of Pall Mall, London, catalogue 81, 1950, item 104; acquired by Frederick, 2nd Lord Hesketh (d.1955), with Easton Neston shelfmark on upper paste-down
Collation (of a complete copy): [PI]A6 ([PI]A1+1, [PI]A5+ 1:2); A-Bb6 Cc2; a-g6 ÷gg8 h-v6 x4; 'gg3:4' (± 'gg3') ¶ - ¶¶6 ¶¶¶1 aa-ff6 gg2 Gg6 hh6 kk-bbb6, 454 leaves
Condition: lacking four of the preliminary leaves ([PI]A1, [PI]A1+1 and [PI]A5+1:2, all supplied in engraved facsimile), [PI]A2 repaired (chiefly at inner and outer margins, with some restoration affecting a few letters), [PI]A3 extended, repairs at inner margins of [PI]A4 and[PI]A5, slight restoration to edges and margins of [PI]A6, minor worm hole to text near inner margin of leaves A6-H2 (chiefly affecting B5-C3), minor repairs to lower corners of A1-B4, tiny loss to outer corners of D1-D2, neat repair to tear at lower margin of H3, tiny loss to lower corner of m3, neat repair and restoration to tear near lower margin of v6, further small repairs or tears to edges or corners of L1, k3, mm1, nn4, qq2 and aaa2 (slightly affecting border),penultimate leaf bbb5 repaired at corners, final leaf bbb6 repaired at corners and outer edge (affecting border), some tiny rust or burn holes to some leaves, sometimes just affecting one or two letters (including O6, P3, P5, Bb2, b6, o4 and v6), some occasional ink blots or wat

Today is the first page in a new chapter of our mission to improve access to the cultural and educational treasures we know as books. Google eBooks will be available in the U.S. from a new Google eBookstore. You can browse and search through the largest ebooks collection in the world with more than three million titles including hundreds of thousands for sale. Find the latest bestsellers like James Patterson’s Cross Fire and Jonathan Franzen’s Freedom, dig into popular reads like Laura Hillenbrand’s Unbroken and catch up on the classics like Great Expectations, A Tale of Two Cities and Gulliver’s Travels.

We designed Google eBooks to be open. Many devices are compatible with Google eBooks—everything from laptops to netbooks to tablets to smartphones to e-readers. With the newGoogle eBooks Web Reader, you can buy, store and read Google eBooks in the cloud. That means you can access your ebooks like you would messages in Gmail or photos in Picasa—using a free, password-protected Google account with unlimited ebooks storage.

In addition to a full-featured web reader, free apps for Android and Apple devices will make it possible to shop and read on the go. For many books you can select which font, font size, day/night reading mode and line spacing suits you—and pick up on the page where you left off when switching devices.

You can discover and buy new ebooks from the Google eBookstore or get them from one of our independent bookseller partners: Powell’s, Alibris and participating members of theAmerican Booksellers Association. You can choose where to buy your ebooks like you choose where to buy your print books, and keep them all on the same bookshelf regardless of where you got them.

When Google Books first launched in 2004, we set out to make the information stored in the world’s books accessible and useful online. Since then, we’ve digitized more than 15 million books from more than 35,000 publishers, more than 40 libraries, and more than 100 countries in more than 400 languages. This deep repository of knowledge and culture will continue to be searchable through Google Books search in the research section alongside the ebookstore. 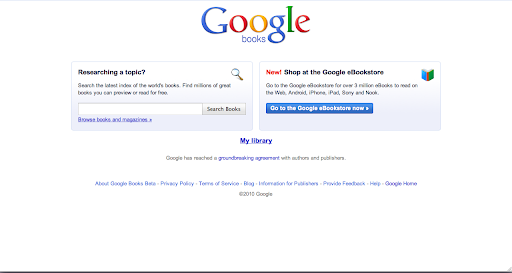 Launching Google eBooks is an initial step toward giving you greater access to the vast variety of information and entertainment found in books. Our journey has just begun. We welcomeyour feedback as we read on to the next chapter.
Update 8:11 AM: Some of you may be having trouble watching the YouTube video. We're working on the problem and will update here again when it's fixed.
Update 10:37 AM: The video should be working for everyone now—thanks for your patience.

This work by Zsolt Almási is licensed under a Creative Commons Attribution-NonCommercial-NoDerivs 3.0 Unported License.